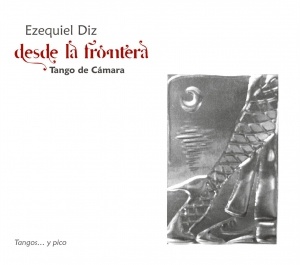 Framed in a nascent genre called Tango of chamber, she gives birth to her first album, totally integrated by works of her authorship. Desde la Frontera (From the border) it refers precisely to that place in which these two musical spheres intertwine.

Recorded in different places of Rosario and Córdoba, between 2007 and 2009, has the outstanding participation of Gabriel Scampino in piano; Gabriel Leo on flute; Nestor Mozzoni on harpsichord; Sergio Puccini on guitar; Anibal Borzone in marimba; Salvador Trapani in saw and the Chamber Orchestra “Artentfaltung”.

Throughout the course of his listening we can notice, little by little, how the elements of the popular genre are shaping up and how his novel use, typical of a pen formed in the academy and inspired by the perfume of the city, is decided.

From an apparent eclecticism, we find as the first work a Tango for solo piano, of an energetic and clearly virtuous character; a Sonata for harpsichord and flute, in three movements where the music and gestures of the baroque come back to the present with a modern chiselling; Tres Piezas Populares for guitar, here is appreciated from a nostalgic melody to a three-way Fuga with the imprint of the classical guitar as a foundation. Fantasía concertante for piano and flute, taking famous melodies by W. A. Mozart, is an ingenious work of ironic character at the same time as a tribute to this great creator; a Canción del serrucho for saw and marimba, simple piece in which the sonorous beauty of this unknown musical instrument unfolds, accompanied by the simple timbre of the marimba and, as a gift, a live record of the third number of his Tres Tangos for string orchestra with piano, taken from a concert held in Alte Börse Leipzig, Germany in September 2008 and under the direction of Stephan König.